How To Remove A Hook From A Fish 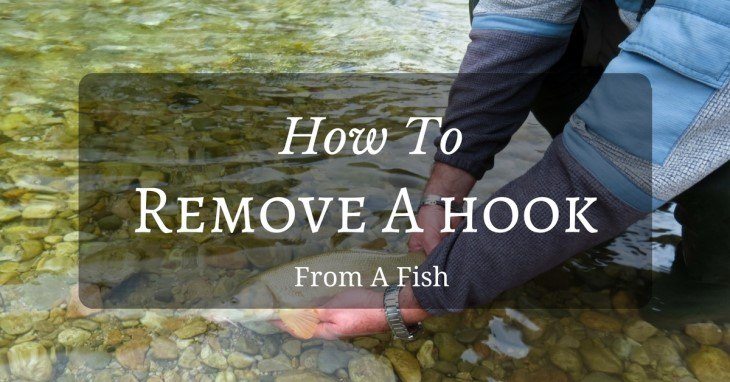 Releasing the fish you catch is an incredible way to make sure that they not only remain safe and healthy, but they also survive. Sadly, it is not enough to only ‘toss a fish back’ after unhooking it. A good amount of fish released usually, die later because of a number of reasons.

In this primer, I will explain how to remove a hook from a fish. I’ll also share some of the reasons that can lead to the death of a fish and exactly how to avoid them. Read on.

Let us start with hooks. A fish hooked in a lip is easier to handle compared to that hooked in the gills or gullet. You’ll have an easy time removing a hook from the lip of a fish without causing major damage. However, the same cannot be said when a fish is gut hooked. For the gut or gill hooked fish, it is much better to just cut off the hook and release it.

You should never try to a line in order to free the hook. Doing so can bring with it severe damage to a fish. It can do more harm than good. In some instances, a hook can be dissolved and later on be spat by the fish. In other instances, you may cut a hook’s eye off or gently slide it out. Nonetheless, it is not advisable at all, if you’ll have to pull a hook in order to remove it.

When unhooking a fish, the more time you take, the much stress you install on the fish. Ever heard of the saying, ‘stress kills?’ It not only applies to humans but fish as well. The longer fish is out of the water, surely the less(fewer) chances it has for survival. Quickly returning fish to the water highly increases its chances for survival. Therefore, catching and releasing fish carefully and quickly is highly important. This is why we are here in the first place.

Before looking at steps to confiscate a hook from a fish, let us first look at the things you’ll need:

Steps To Help You Remove A Hook From A Fish

Step #2: Try to confiscate the hook from a large fish while it’s still in the water. If you find it impossible, a wide mesh landing net that’s composed of soft material will also work. Remember not to scrape away any of the fish’s slime or scales. They act as natural protection against parasites and diseases.

Step #3: Refrain from holding fish such as sucker, bass, pike, catfish, or trout by their belly. Doing so can damage their internal organs and result to(in) death. If the fish is large, try laying it down on a damp towel as you gently try to remove the hook. Always avoid handling any fish by its gills. Doing so can also kill it real time. Obviously, that is the last thing you want.

Step #4: Use your hand to remove the hook. This is especially true if the fish you’re holding is of smaller species such as crappie bluegill. Grip the fish by footing it on your palm. Prevent the spiny top-fins from extending. Take the hook’s top in your fingers. Push down the hook in order to ensure it exits the lip or jaw of the fish in order to remove it. Remember to hold the fish still while at it.

Step #5: Utilize a pair of forceps or needle posed pliers to get rid of the hooks from the fish. Fish such as thick lips, trout, bass, carp, and suckers have thick lips or tough jaws that make it necessary to utilize a tool. Pickerel, muskellunge, and pike usually have their mouth full of extremely sharp teeth. Grasp the hook from where it starts to bend by using a tool. Swiftly force it down. As you do that, try pushing it away from the exact location is lodged. Finally, carefully remove it from the mouth of the fish.

Step #6 :Has the fish swallowed the hook? If yes, then cut any hooks closest to the line. In any case, don’t attempt to fully remove them, you should cut them. Trying to remove them will result in the death of the fish. For this occasion, always remember to carry a set of nail clippers with you.

Best Practices on Catch and Release

Catch and release are one of the most beneficial techniques to fisheries. Best practices on catch and release should keep the best interests of the fish at heart. You should not only learn the practices but must also purpose to practice and share them with others. By doing so, you’ll be playing your noble part in maintaining healthy fisheries as well as restoring those that suffer.

The Following Are Some Of The Best Practices Of Catch And Release:

Removing a fishhook correctly and quickly raises the chances of releasing the fish and having it survive. Anglers that choose to keep their catch have all the time in the world to remove a hook. However, time is not on the side for the catch and release anglers. The difference between your catch living and dying during a hook removal procedure solely depends on your skill, speed, and knowledge.

Did you enjoy the tutorial? I really hope you did. Removing a hook from a fish does not have to be challenging contrary to the perception of many people. This primer is dear to me because I understand that many catch and release anglers experience difficulties when it comes to removing a hook from a fish. By keenly following the steps above, there is no doubt that you have an easy time in your procedure. You might also want to check out these fishing hook removal methods available. All the best! Feel free to leave your comment or opinion in the comment section below.