What Is The Best Frog Lure For The Money 2018 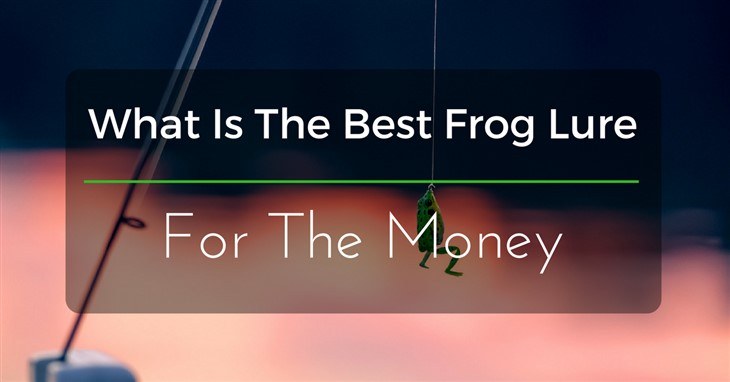 Bass are known to be found in a similar environment with different frog species. They have grown to develop great love for the taste of full mouth of frog. On the frogs too, they tend to stay around where these bass are and therefore their paths often cross and most of the time the frogs are on the losing end. However, this can be turned into a great advantage for fishers as they can make use of the best frog lures which can give you the best interesting bass fishing that you can get.

We are going to be focusing on what people know as frogging. Frogging is a bass style of fishing in which you will be throwing the hollow bodied soft frogs into the thick part of the vegetation floating on the water.

One of the biggest advantages of making use of the frogging style is that you can cast your lures almost anywhere. Out of the most important things, the most prominent thing about the frog lures is that they have their hooks facing upward and its rest of it flush just against the lure. Also, the lures float in such a manner that the hooks never come near the weeds that are under them. With this feature, you can get to drag the frog across the lily pads as well as other vegetation on the surface without you worrying about your lure getting hanged.

There are a number of different frogs lures out there. One of the most popular and effective is a body style that is hollow. These styles of lures usually have models that have pointed nose; however, there are other models which are known to have a pointed nose as well just like a popper lure. Apart from that little difference, similar is the word to describe them.

Your line ties directly to the eyelet just at the tip of the nose of your lure that is connected to 2 different hooks which run across the lure belly and also shoot out its rear. The lure bodies are usually made of plastic that is very soft which are designed not only to collapse but also get the hook exposed once it is bitten by a bass. They also usually come with two strands of rubbers that are attached to trail off their back so that they can mimic the kicking legs of a live frog.

Frog lures can be found in different colors and sizes. It is just a perfect idea to stick with the natural frog colors such as greens and browns in majority waters, most especially when the water is clear. Most lures are designed to have a belly that is brighter which is white or yellow so as to distinguish them and make them stand out in muddy or stained water. However, if you discover that the water in question is really murky, and then just goes for a frog that is white totally.

Frogging is a different way of fishing bass on its own. It is indeed unique to the extent that majority of the serious anglers usually keep a separate reel and rod combo strictly for throwing frogs alone. This is mainly due to the specific tackle that is required when you’re casting them.

Frog fishing is usually done within weeds that are thick such as areas heavily padded with lily. What you’re basically doing is using the weedless nature of a frog and making use of it where a live frog cannot go to your own advantage. That is the main reason why obtaining the correct tackle is very mandatory. In case your frog gets a very big bass while in the center of lily pads that is thick, then you will be having some troubles removing it from there without you having the correct tackle.

Fishing big bass in the presence of a cover that is heavy is a blast, except the catch remains on the line, and that is one of the most crucial parts of frogging; which is your line. Very strong line such as braid is needed for frog fishing that is effective. The visibility of your line might be compromised during frogging as it is not very important but the strength should be very good. In case you will be making use of mono, you should at least have 20 lb test, however braid is more recommended.

You will also need to be in possession of a very good rod for frogging as well as a lot of backbone so as to provide you with better leverage during the wrestling of the bass through the thick vegetation. Make use of one with a ﻿﻿baitcasting﻿ reel that is very solid, and you will enjoy a day of frogging. Spinning reel﻿s might also do, but they do not come near bait caster in terms of their torque. 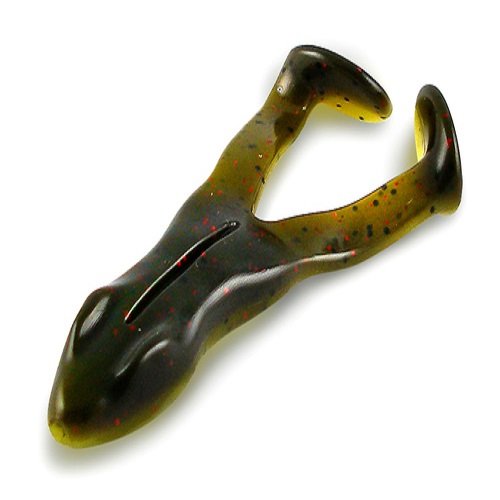 This is a 4” ribbed frog bullfrog that contains 5/pike; all you need to do is to reel it, feel it, and watch the fishes go for it! It is very hard to find another lure in the market that does the combination of the heart-throbbing excitement of great water baits with the fish finding abilities that buzz bait﻿s offers as well as the weedless edge that the Texas rigged soft plastics offer until now. You should always be ready for the ribbed. The ribbed is essentially a four-inch soft plastic frog that possesses uniquely designed “feet,” that goes on to create some realistic kicking action that makes it look, feel, and sound like a real like frog is jumping across the water. This lure is one for you to explore! Made of soft plastic and ribbed.

Apart from buzzing this lure across grass, anglers can hop a ripped just exactly like a normal live frog would. Letting it swim underwater a bit and raising it back. A ribbed will catch fishes in any cover that just any standard buzz bait will work just fine. 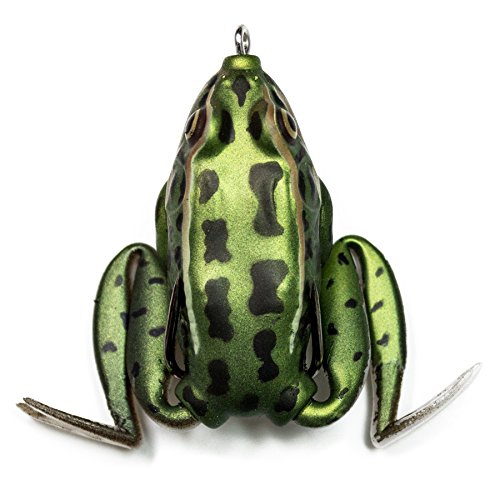 The lunkerhunt LF01 Lunker Frog lure is one of the most life like frogs that you can currently get in the market. It does a pretty good job in mimicking a life adult frog and it also has spinning legs which extend during the recovery and also retracts whenever it pauses. The lunkerhunt is about 2.5 inches long when at rest, and can extend as much as 2 inches more to reach 4.5 inches when on the retrieve.

The Lunker Frog exhibits all the characters of a living frog swimming in the water. This frog lure features some very high-quality components. 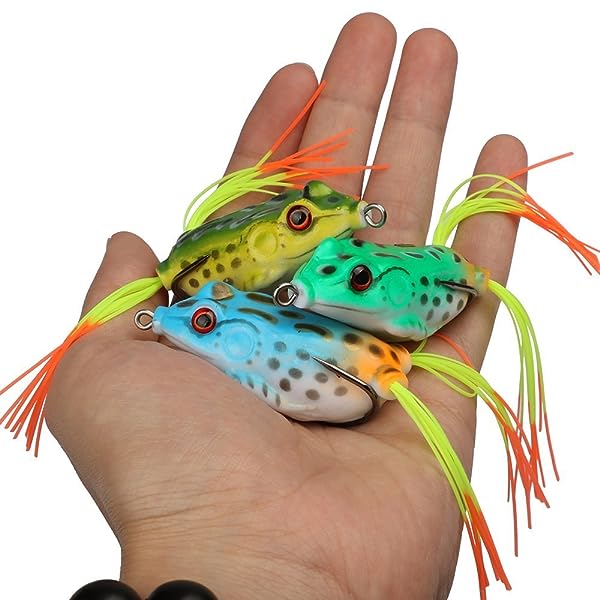 The Goture frog is made with very high-quality components, with really soft plastic body, and heavy lead frog legs to get the best performance in the water. Its body is soft and designed to collapse so as to enable the penetration of hook easily. Employing the use of high strength hook makes it possible for snag free frog fishing and also increases the hook up ratios.

The frog sits and rests in the water just like a real live frog with its realistic body design. It is a rare feat finding a fish that can resist this. The two high strength hooks that come with the frog gives it great hooking action, which is really perfect for fishing snakehead.

Included in the frog pack are 9 pieces of the very realistic frogs with different colors to choose from. They all simulate life-like swimming action which gives you maximum performance. 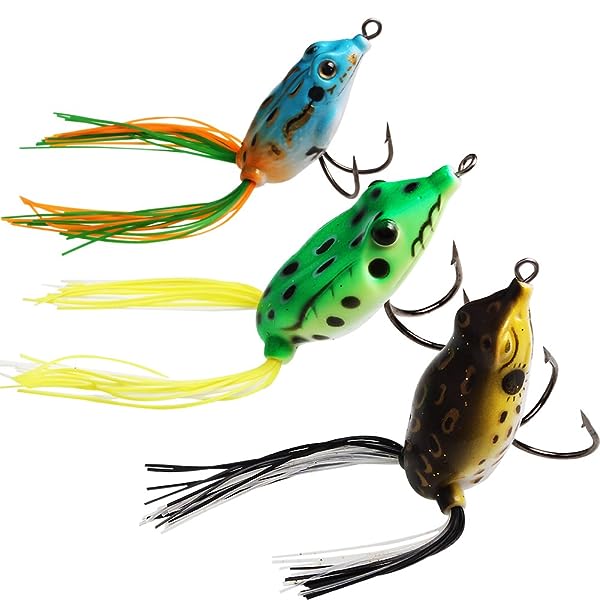 This frog lure is made of PVC, Stainless steel. It closely mimics the behavior of a live frog on water giving you better performance. It also comes with high strength hooks for use during your fishing. Their length ranges from 1.97 into 4.13 in. and their weight is also between 0.14 oz to 49 oz. They have a very soft and flexible body which is hollow. The two hooks on the frog make it almost impossible to snag so that you won’t worry when you throw them over lily pads and weed beds.

The frog lure slowly works over the snags cod or shallows, bass, barra, jacks, and many other fresh and saltwater fishes find them irresistible.

Fishing is fun, most especially when you are in possession of some of the best tools for it. Carefully selecting your frog lure, will go a long way in making sure that you have a successful frogging and a bag full of brass. Some of the best frog lures that you can get have been discussed above.