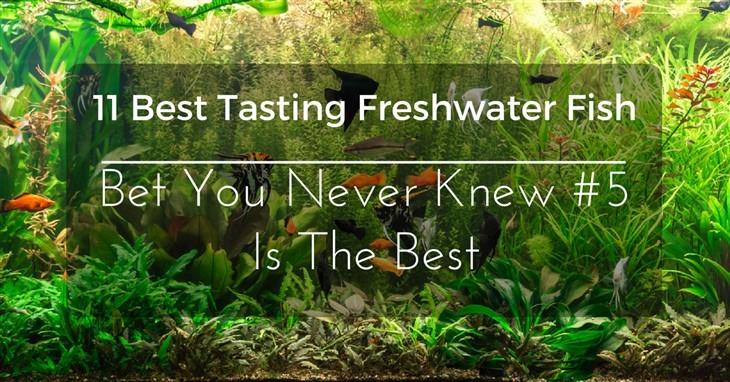 From all indications, regardless of the location, the 'best tasting freshwater fish' is a topic of interest among anglers. And as it is with life, everybody has their opinion on things. But as a matter of fact, the taste of a meal (in this case, fish), boils down to the cooking method used in preparing it.

Freshwater is a residence to some very edible fishes, below are some of them. 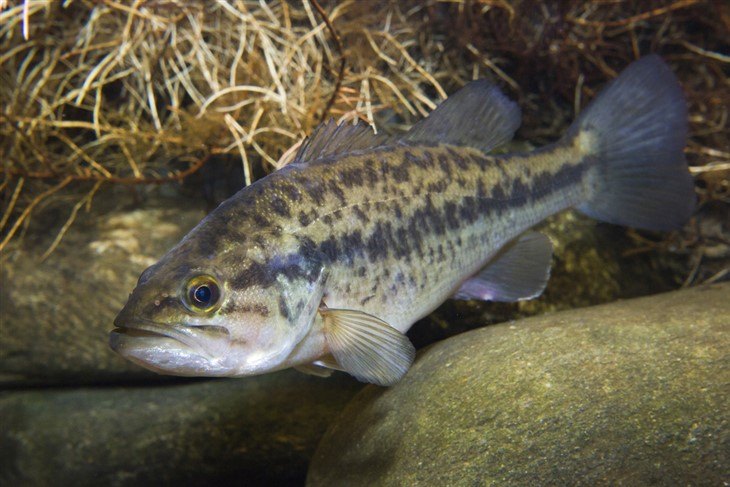 This olive green bass is usually sought after by anglers, not just because they are tasty, but because of their interestingly resilient nature. They have over the years been introduced into many countries and regions due to their popularity as a sport fish. Amongst anglers, there is a strong cultural pressure that encourages anglers to catch and release them when caught - because it causes decline and extinction of this species, and also the larger specimen are mostly breeding females. Largemouth bass is white, and slightly mushy meat. However, the habitat in which it is a native is a major determinant of its taste. When prepared very well, they are quite delicious, and the ones gotten from clear, clean and cold water are known to be the tastiest. 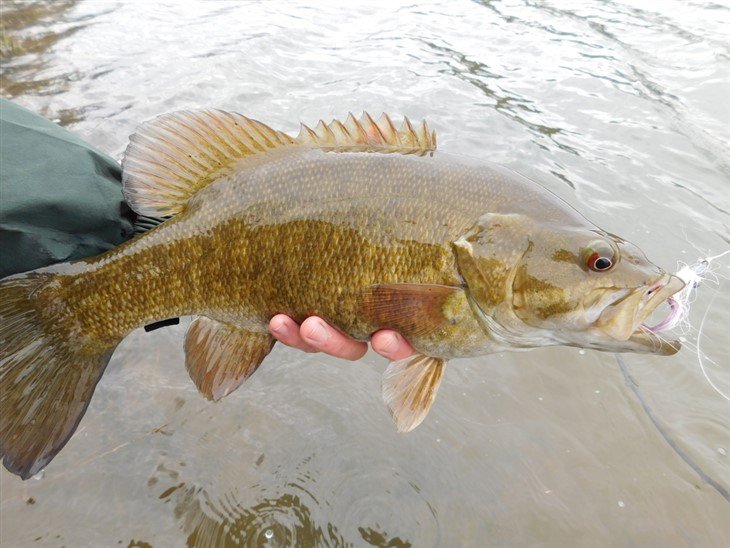 Popularly known as game fish, they are frequently sought by fishers using bait casting gear and conventional spinning and fly fishing tackle. And like its cousin - the largemouth bass, anglers practice the 'catch and release' fishing to avoid its extinction. Their habitat plays an important role in their weight, color, shape, and most times, their taste. thus, dark brown, and torpedo shaped river water smallmouth bass are often natives of dark water, while lakeside smallmouth bass whose habitat is in sandy areas are oval shaped, and light yellow-brown - this color serves as a defense mechanism, aiding them to adapt to their environment. They are known to be very edible, with fillets of white, firm flesh when they are cooked. 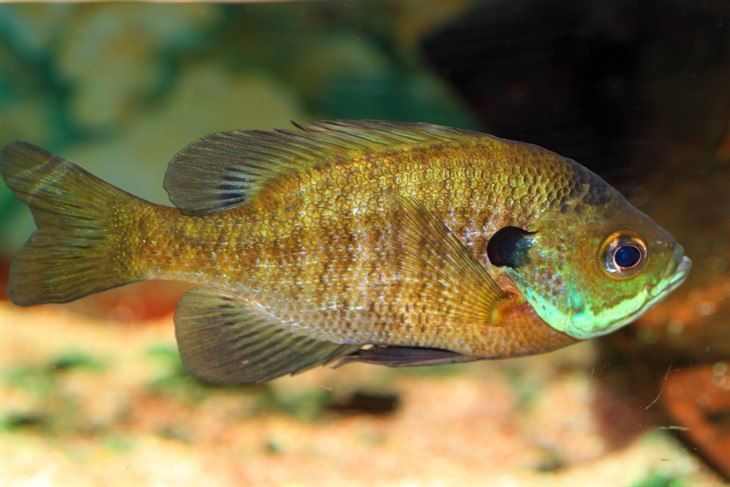 Bluegill is found in streams, ponds, lakes, and rivers in North America. It prefers either shallow or deep waters, and are found hanging on tree stumps or underwater structures. They also reside under tree shades in river banks and find shelter among aquatic plants. Fishing a bluegill could be challenging because of their ability to change directions at and high velocity. Hence, they are fished using fall trap to vibrant colors orange, red or green and yellow, and using live baits. After catching it, there are many cooking methods to make it tasty, but for a long time, the best way to cook it is by pan-frying. They are scaled, beheaded and gutted, but can be filleted. Bluegill’s meat is flaky and white and is tastier if it is fished from clean, cool water. Incidentally, they are also members of the sunfish clan, and they; sunfishes are edible fishes too. 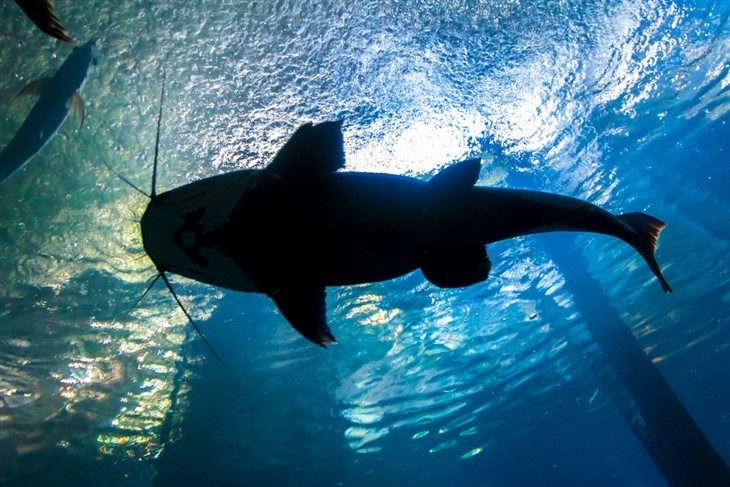 For eons, catfish has been known for being caught as food globally. They are natives of inland and coastal waters in many regions around the world, but it is extant in the Antarctica. Catfishes are farmed in regions with warm climates, although it is tasty and edible like other freshwater fishes, it is regarded as one hard to kill fish. In handling a catfish.

Fish, you must be careful because they possess stings in their fins, as a self-defense mechanism against predators.

Catfish is also not considered a very good fish to eat by many, others still find it edible - some as a delicacy, while some consider it as an excellent meal. In all, if cooked properly, and spiced rightly, they are very enjoyable. 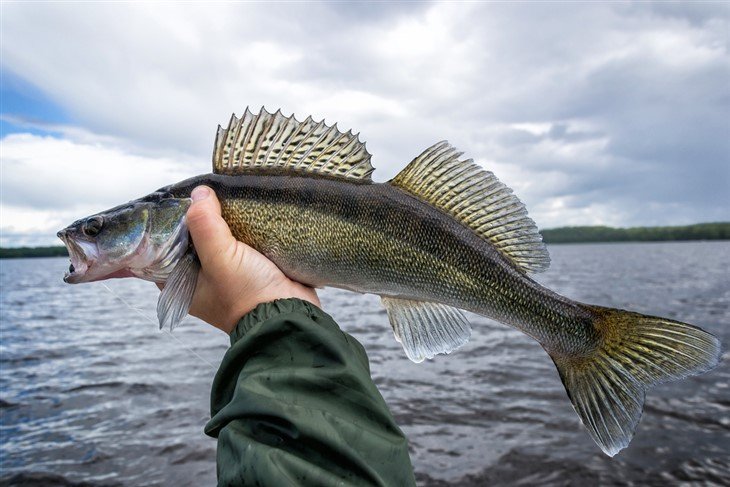 Walleyes usually find shelter at the bottom of lakes and streams, making them a very hard to catch. However, the best times to hunt them easily is in the early hours of the morning and late hours of the evenings, because, they come closer to the surface during these hours. And when caught, they are worth the chase. Among anglers, walleye has been considered the best tasting freshwater fish. They are mostly filleted, but they can be cooked in various ways -baking, frying, and broiling. 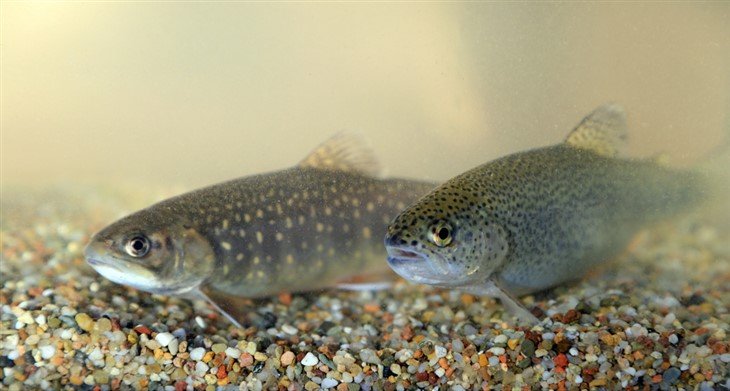 Trout are usually found in cool, clear ponds, streams and lakes. They are amazingly good as meals. Trout are reared in fish farms and then migrated into freshwater lakes. They feed on small aquatic animal parts - a good reason why worms are good baits if you want to catch them. Although, trout are known for their resilience too, as they are not easy preys. Trout are seen to be bony but have tasty flesh because they feed on nutritious crustaceans. It is often said that trout caught minutes before cooking is very delicious - the fresher, the better. There are various suitable ways to prepare a trout - they can be smoked, baked or broiled. However, pan frying is the best for smaller ones, while filleting is preferable for large sized trout. 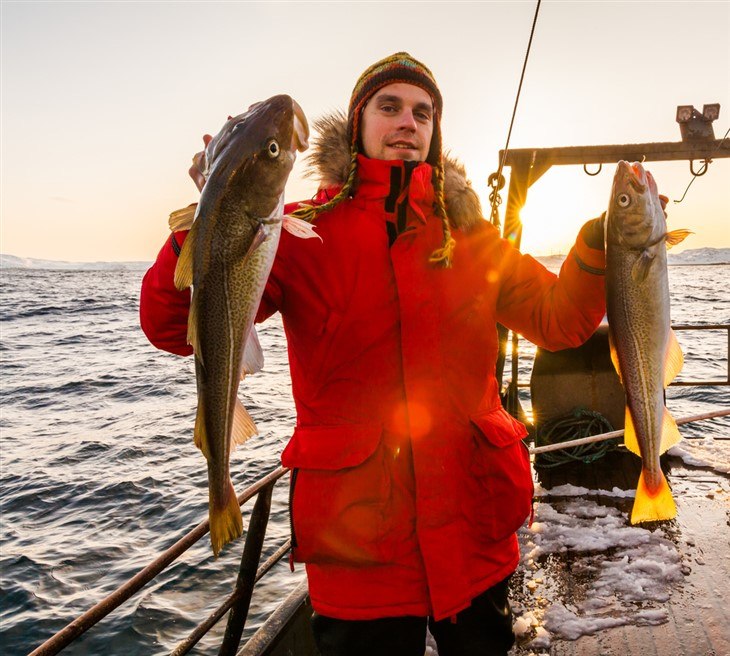 Cod are found in both Pacific and Atlantic waters. They reside in cold waters and deep sea areas of the north Atlantic, while cods found in the pacific, resides in the western and eastern parts of the pacific. They are characterized with a mild flavor and a flaky, white flesh. And are popularly consumed in places like Portugal, Spain, Brazil, and Italy. Cod livers are also processed for the production of cod liver oil, which is rich in vitamins A, D, and E, and omega 3 fatty acids. 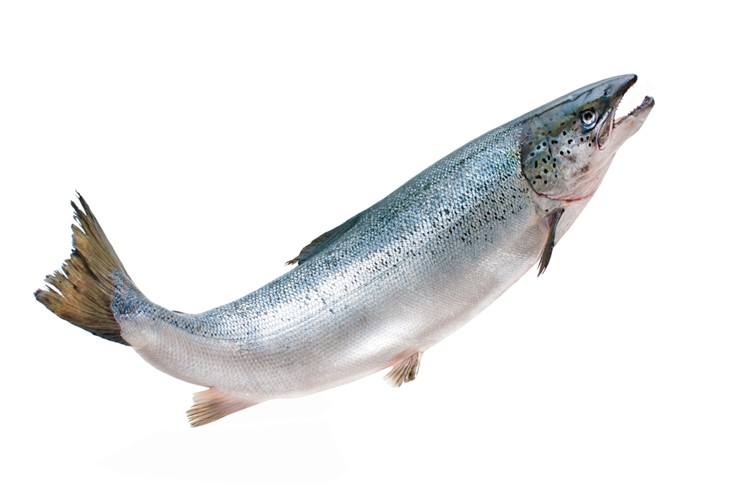 Salmon﻿﻿s come in different colors, ranging from orange to red and even white. They are carnivorous fishes and feed on other aquatic organisms and meals produced from other sea fishes.

Salmons are reared and loved by many in most parts of the world. hence, they are consumed by millions, because they are a source of omega 3 fatty acids, rich protein, and high in vitamins D. salmon are also rich in cholesterol because of they are oily. They are prepared by smoking and canning. 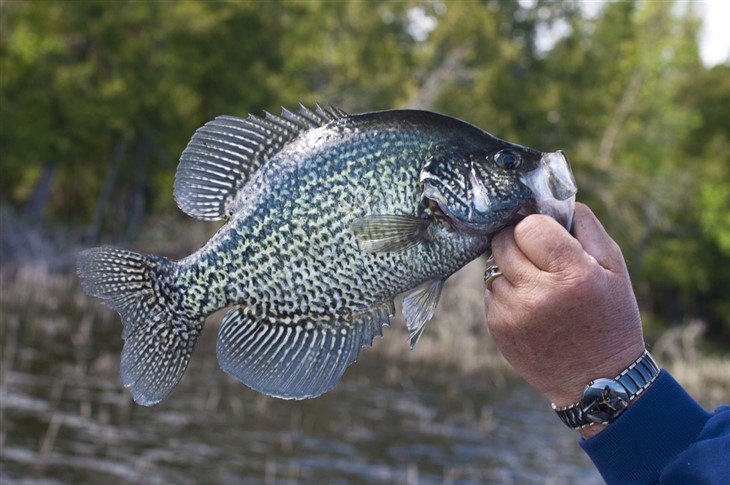 Crappie is widely found in the United States and very popular in the south. They are sweet white meat and are tastier when prepared well. Frying is the common cooking method. But just like bluegills, the larger ones are filleted, while the smaller sized crappie is cooked whole. 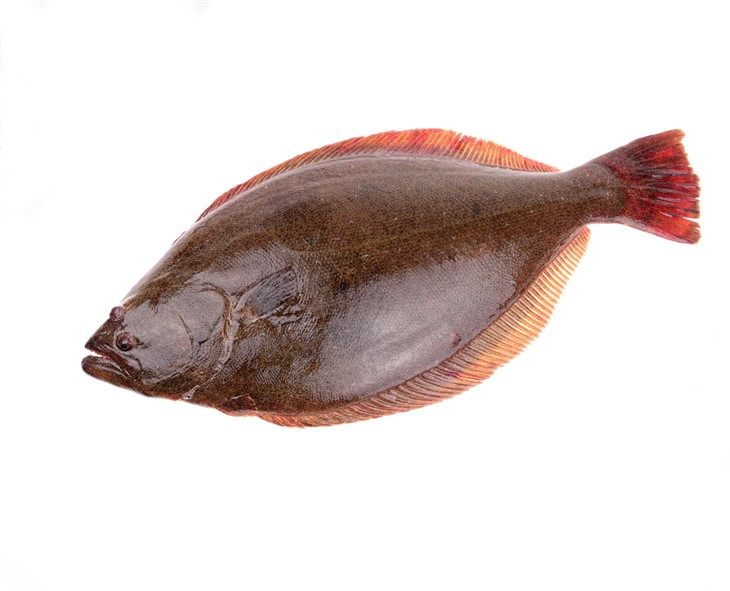 Considered as very edible. Halibut can only be found in north pacific and North Atlantic Ocean. They are flatfishes, with the species found in pacific oceans as the largest. They feed on any edible thing, inasmuch as it could go through their mouth. Their flesh has a firm texture and very dense, and also comes with a clean taste. They are boiled, and grilled while fresh, and can be deeply fried to enjoy it. 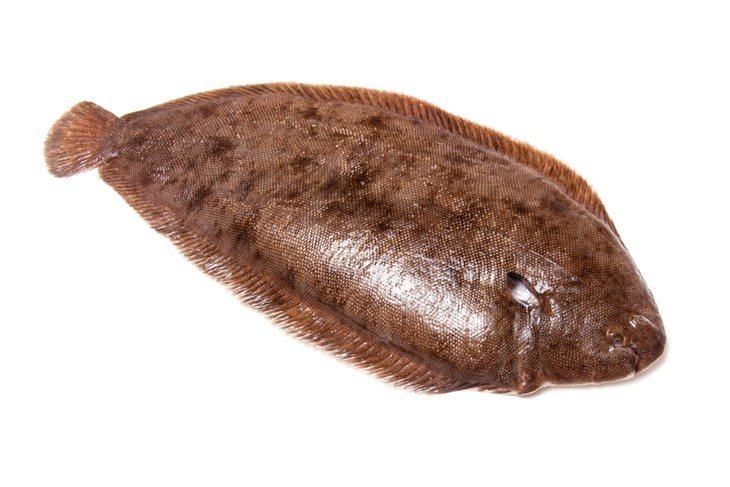 Another flatfish found in the sandy seabed or muddy parts of the northern Atlantic, and the Mediterranean Sea. As such, the best way to catch this fish is by trawling the seabed. They are characterized with a grayish upper and white underside, they do not exceed 28 inches. Hence, the smaller sized Dover soles are pan fried, which the large ones are filleted. Due to the ease in preparing it and mild and sweet flavor, it is noted to be a favorite choice among chefs.

From the list above, it is evident that although the fish may be edible, but your cooking method could make it tastier. Find time to have a taste of all, if you can, as they are very nutritious.

I know you have added knowledge by reading this article, thus, drop a comment, and share with family and friends.